Brandon Lewis of Santa Monica College has been excavating the Dos Barbaras site for about 10 years. As part of a book project devoted to the site, he contracted your humble host to take some immersive photography of some the groups. I spent the majority of a week going to the site & photographing it as extensively & intensively as I could. The results are below.

The work has been placed online so that students who had been at the PfB could see where they had been & show friends & family where they have been. However, it’s also acting something like a placeholder for Brandon until he can set up his own site.

Please note: you will need at least Quicktime 5.0 to view a lot of the work here, particularly the work I did at Dos Barbaras. If you don’t have it, go download it — it’s free from Apple.

A Very Rough Map of the Site

As I write this, Brandon’s probably wending his way back to Santa Monica. When he gets there he’ll be sending me a more accurate map. In the meantime I’ve provided this very poor map that should help you situate yourself (however roughly) at the site.

Hopefully, we’ll have useful links between the different sections of the site, and when I get a proper map from Brandon I’ll redraw this.

As you can see, there are multiple panoramas for some groups (Groups A & B, for example). These are multi-node panoramas, i.e., they’re linked together within a given panorama. So, for example, you go to Group B and view the panorama, and then you click the links within the panorama in order to view the other panoramas associated with Group B. If you’re having problems finding the links (technically called “hotspots”), click the button on the control bar with the arrow & question mark — this will show the hotspots in a given panorama.

You can also zero in in order to view details & draw back within the panoramas if you want to get a better idea of your situation — you can either use the “+” and “-” buttons on the control bar, or use your shift key (zoom in) or control key (zoom out).

On the last day of shooting, I took several photos to give an idea of the walk between different groups. It was extremely dark & rainy at this point, and I’m afraid a lot of the photos were blurry. However, I’m still working on getting these path movies completed so you can at least get an inkling of the spatial relationships between the different Groups. These movies will be embedded within the panoramas — where it says "Pathway to Group X", you’ll be able to proceed through a series of linked stills in order to get a feeling for the site as a whole.

Update: Sadly, it seems that my plan for “pathway to x” isn’t going to happen anytime soon. It seems that there are limitations in the technology of my applications that stops me from mixing panoramas & object movies, the latter the way I had prepared fo the project. Perhaps someday… 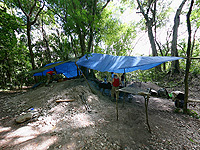 This is one of the more complex panoramas on the site, because it not only shows the general lay of the land and its location vis-á-vis other structures, but also because you can look inside the excavation & look at a burial (which, believe it or not, I uncovered in 2003).

In this structure, you get the general lay of the land: directly in front of you is the main excavation. To the right of that is a secondary structure where more burials have been found. Towards the back is another low-lying structure, and then the land declines to a lower plain. There are additional panoramas which show the amount of elevation behind the structures at Group A, as well as another panorama of the excavation & a final panorama which allows you to peer into the dig to view the burial.

Make sure you look into the excavation in order to view the burial that they extracted. Apparently it was in unusually good condition. Usually, bones tend to crumble at the slightest touch, and bits of the hips are rarely recovered. Also, this individual appears to have had some nasty-looking type of “bone-spur” attached to one of his vertebra.

OK, like the last one, this panorama is pretty complex as well. You are initially viewing from the centre of the plaza (don’t forget to have a look at the stele in the centre!), looking a the excavations on one side & a secondary structure on the other. Just to the left of the excavations is the steep path leading back down to Group A. You can view two details of the excavations taking place up at Group B: first, Nicole & Vlad record the details of a burial that they’re extracting; second, you can see Yoav recording details of a large wall they found.

There are also some assembled stills to view: atop the ladder (somewhat distorted), two images from the centre excavations (01 & 02), and there’s also a final image of the central excavation.

Prior to excavation, Lauri Thompson took this photo of the plaster floor (the Maya were very good at making these, it appears) with her Kodak DX6490. 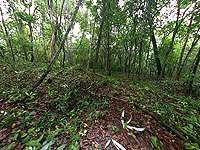 Group C is found behind an incline on Group B. Brandon has posited that the structures here may be living quarters for servants.

Directly in front of you is a chultun, and there is a second depression in the land; it’s unclear whether this is part of the same chultun or a second chultun that has collapsed. Behind you is the incline leading up to Group B. In front of you is the second panorama of a secondary structure (the panorama was built on top of it). You can see how the land descends in steps at this point, and Brandon has pointed out a series of nice, flat terraces probably used for agriculture.

Group D is closer to the main road, and seems to consist of two smallish structures, arranged kitter-corner to one another.

In this panorama, we’ve got two of the Maya workers, Ube & Manni, standing on the structures in order to give a sense of scale.

I’m afraid I don’t have much more information to put about Group D in this section — Brandon & I didn’t discuss it much. All I can say is that it was described to me as “Tick Heaven” — when Ube & Manni cleared the brush from the area, they were apparently covered with the lovely little things.

Group E starts with a large-ish flat plain, with a couple of structures on either side of it (Manni stands upon one of them). Behind you, just to the left of the path leading back to Groups C, B & A, is a chultun. Ahead of you is the gradual incline that leads up to Group F, the path to which Ube rests. Just to the left of Ube is a small elevated plain.

After clicking to see the second panorama at Group E, you’ll be closer to the elevated plain. For a sense of scale, Manni stands on the plain, and Ube stands on the path leading up to Group F. Behind you is the gradual decline leading back to the centre of Group E. 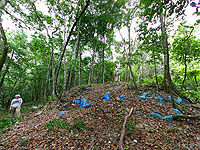 There are a series of terraces — fairly low & in my experience, difficult to photograph — that lie between Groups F & G. Brandon & Yoav said that they were used for farming purposes. In addition, there are clusters of stones at different points, where the Maya seemingly dumped rocks that were in their way. Brandon & Yoav didn’t think there was necessarily any meaning to these clusters of stones. 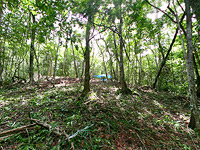 The panorama for Group G has three panoramas: first, the panorama showing the steep incline up to Group G, the centre of Group G itself, and then a detail of the excavation.

In addition, there are two still photos: one showing a detail of the floor found to the left of the excavation, and a second photo showing the wall just behind the excavation.

Unfortunately, I came along after they had been looking through some of what they found in the excavation, so there is little to be seen in the detail. However, it does give you a feeling for what it’s like to be there. 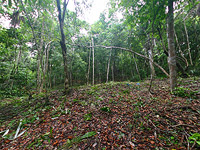