Introduction to the Belize Diary 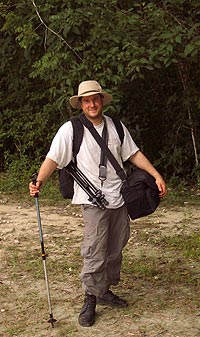 Travelling light, trying to stay upright: your host at the end of a long day. Taken by Jenny Saul with a Pentax Optio S4

In June 2003 & July 2004, Ray Drainville of Argument from Design (that’s your humble auteur) had the distinct honour to work at the Programme for Belize Archæological Field School run by Fred Valdez of the University of Texas at Austin. Belize was heavily inhabited by the ancient Maya, and the PfB field school’s surroundings (in the Rio Bravo region in Orangewalk District, Belize) are seemingly saturated with sites.

In June 2003, I came down & made Quicktime Virtual Reality images (a.k.a. “immersive photography” or “panoramas”) of the field camp. We’re known for our work in this field, and these panoramas can be very useful, because like many archæological field camps, UT depends upon student labour. Many students worry that they can’t handle living in the jungle, and that if they had such a fuller introduction to what life was like at camp, they might be more inclined to have a go.

I had time to spare, so I went to Dos Barbaras, a site run by Brandon Lewis of Santa Monica College, & took some panos at one of the sites they were working on. He liked what I did & invited me back in 2004 to take a more in-depth look at the Dos Barbaras site. Weather permitting (this is a major factor—there’s a reason why they call it a “rain forest” after all), I was taking about 250 photos per day, and much of the work assembling the panoramas was done at the camp itself. This site is intended to act as something of a commemoration of my time there, and a tribute to the extraordinary people I met & places I saw. It also acts as a holding place for the work I did for Brandon while he prepares his site to host the panoramas I took.

NB: Unless otherwise noted, the pictures & panoramas taken on this site were shot by me with my beloved Canon 300D.