Hold your horses. Much more is coming soon.

Click for bigger picture. Taken by Jenny Saul with the Pentax

I don’t know what it is, but Jenny’s got an unusual eye for many of her compositions. This one looks entirely too much like a Baroque Crucifixion painting (and no, the picture on the home page wasn’t supposed to make me look like a happy 17th-century peasant back from the hunt, but that is its effect).

One of the ideas Stan Walling & Brandon Lewis had had while I was off making my virtual reality panoramas was to have me take shots from above: this way you could get a much better feeling for how the land was moulded by the inhabitants of the region. To this purpose, a couple of the Maya workers, Ube & Mani, constructed a couple of beautiful-looking ladders out of branches & vines.

Click for bigger picture. Taken by Yoav Me-Bar with his camera

By the way, this isn’t the most absurd picture of someone working on this burial: Lauri took a picture of Julie Saul (my wife Jenny’s mother), curled up & working upside-down with her head in the tiny hole they had made.

In this shot, we have Nicole Osswald (top) & Lauri Thompson (bottom), both grad students, and along with Frank & Julie Saul some the bone experts at the Field School, working simultaneously on a very cramped burial in Group A. The working environment was, shall we say, not optimal: they had a mosquito coil burning to keep away the pests, but the fumes made them light-headed. They often had to work upside-down in the excavation hole; and, as you can see, poor Nicole could only work with one hand behind her back. Sometimes, Nicole had to have bowls to collect rainwater atop her back so it wouldn’t pour into the burial. Frankly, I think she was doing it to show off.

A Nicer Picture of Nicole

Click for bigger picture. Nicole not upside-down. Taken by Lauri Thompson with her Kodak DX6490

Here’s Nicole Osswald in a rare pose: not upside-down. Note the happy, care-free smile: this was long before she was spending eight hours a day upside down, with her head inside a tiny hole.

We became pretty close to Nicole in the space of a week. A very warm, fun character, she greeted us like old friends the moment we, bedraggled & jet-lagged, arrived at camp, having heard about us from Jenny’s parents. We instantly got along and spent much of our non-work time (i.e., breakfasts & dinners!) together. Along with Lauri Thompson, we became very adept at collecting & collating camp gossip (don’t ask, our lips are sealed).

Click for bigger picture. Yoav takes a break as it rains too heavily for work

Yoav is one of the senior supervisors at the Field School. A physicist from Israel, he’s had a lifelong love of Maya archæology — from about the age of 13, he told us this past time.

He’s worked a lot with Brandon Lewis at the Dos Barbaras excavation. I of course met him in 2003. When my initial panos that year were finished, I helped out on some of the digs. At one point I was working removing backfill from Group A at Dos Barbaras. It was backbreaking work done with a couple of Maya workers who were half my height & three times my strength. Yoav was extremely careful with us, telling us to drink water (or, more accurately, bebe agua) very frequently. I think he may have saved my life, or at the very least saved me from passing out.

Along with Lauri & Nicole, Roz Montgomery was also entrusted with the extraction of skeletised remains at Dos Barbaras. Here, Lauri, Julie & Roz are in the truck’s bed on the trip back to camp after a long (and successful) day. Lauri took another photo of Roz in situ.

They are doubtless also happy because they’re getting a lot of cool air blowing on them. Seats on the trucks’ beds where always the most sought-after at the end of the day. You can also get some free chiropractic services at the back there. At one point, Julie’s neck had been hurting her from an injury. One good bump, and her neck went pop, and she felt right as rain. 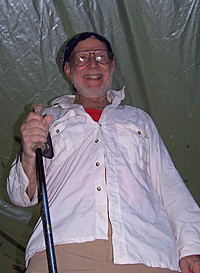 Click for bigger picture. Frank oversees an extraction. Taken by Lauri Thompson with her Kodak DX6490

Frank Saul is my wife Jenny’s father, and husband to Julie Saul. He’s got a lot of experience with Maya bones going back many decades. I’m not going to go into the details, because I’ll get them wrong, and I’ll only irritate him. Haven’t you heard that this is not a good idea with your father-in-law?

While we were down in Belize, Frank & Julie were overseeing the extraction of skeletised remains from the burial sites. Being the more limber of the two, Julie was the one who had to work upside-down.

The thing that constantly impresses me about both Frank & Julie is that they can look at a piece of bone—a mere fragment—and they can identify it; not just as bone, but which bone. These fragments can look like pebbles, and this is why the extractions were entrusted to a very, very few people.

Click above for bigger picture. Taken in 2003 with a Kodak DC290

Sometimes when it rains, what can you do? Mell knows what to do: take a cigarette break. At first she was just standing there, but Nahum very kindly cut some palm fronds for her to make a kind of umbrella. Unfortunately for him, he didn’t cut enough for himself.

By the way, she always collected her cigarette butts, put them in a plastic bag & disposed of them back at camp. The picture was taken at Stan Walling’s site, which is an amazing one to view (and you have to saddle up with snake guards and machetes there; pretty hardcore).

Click for bigger picture. Ray, Brandon & Yoav return in a cloudburst. Taken by Lauri Thompson with her Kodak DX6490

On the last day, after I’d taken a bunch of panoramas, I had the (not so bright) idea of trying to indicate the spacial relationships between the different groups at Dos Barbaras. It was pissing down rain, and I wasn’t allowed to go off by myself (what with my total lack of survival skills and everything). Brandon Lewis (my personal pater patronas) and Yoav Me-Bar came along with me, helping me carry my equipment & make sure I didn’t destroy the camera with rainwater.

It had been raining—heavily, of course—in the camp, and Brandon couldn’t help but take the piss out of me for carrying around my umbrella, calling me “Mary Poppins”. OK, maybe I deserved it, but who’s been caught with the umbrella, huh? Huh?

A Group of Drunkards at Chan Chich

Belly up to the bar: a day away from camp. Click for bigger picture. Taken by one of the hostesses with the Pentax

It’s not all about digging up pots, bones and structures, you know. And the other part isn’t [just] even about fighting off creepy-crawlies. One evening a group of us when to Chan Chich, a resort (and archæological site in its own right) to have warm showers, a swim, some tasty drinks (try the “Jaguar” — it’s fantastic) and some nice food.

From left to right: Dee, artist-in-residence at the PfB Field School; Jenny Saul, my wife; me; Nicole Osswald; Norman, the proprietor at Chan Chich; Lauri Thompson; and Kevin, one of the students working on environmental issues at the School. Lauri Thompson’s Kodak DX6490 got a second shot of the same scene (also slightly blurry; perhaps we had an effect on its composition).

On the prowl for information. Taken with Lauri Thompson’s Kodak DX6490

On our last night there, there was a party — it was one of the last nights for the student groups as well, many of whom were leaving for rest & relaxation in a day or so. In order to not disturb the hard-working, sleeping people in camp, the revellers went out onto the nearby dirt road. Ever curious to find out what was happening (sample quote from Lauri Thompson: "You guys! I want to take pictures!"), some of us set out to find them.

From left to right: Peter (aka “Bear”); Brandon Lewis, my pater patronas; and gossip hounds Nicole Osswald, myself, my wife Jenny & Lauri Thompson.

Giving the Royal Wave, we take our leave

Sitting in the lap of luxury, we give a fond farewell. Taken by Lauri Thompson with her Kodak DX6490

All good things come to an end, and this one came too fast. Here we set off for the three-hour-long bumpy trip to the airport in the lap of luxury. The best way to travel (really) is in the bed of a truck, with the wind cooling you. Grant Aylesworth, one of the archæologists & administrators at the camp, kindly drove us to the airport.

From this starting-point, we went from the jungle to Belize’s international airport; to Newark, NJ; to England. Well over fifteen hours later, we were home & we smelled “fragrant”. One happy bubble-bath later, we were restored enough to sleep like the dead.