It can be pretty dangerous out there, whether you’re in the field or in even in the camp.

As one person said in the camp: if it’s pretty, it’s dangerous. The liberating thing I learned last year was that the animals really are more afraid of you than you are of them. Just don’t corner them, or surprise them, and you’ll generally be OK. I felt that it’s the fauna you have to be frightened of.

The fer-de-lance lies mortally wounded. Click above for bigger picture

The fer-de-lance is one of the most deadly snakes known to humankind. Apparently the traditional method of saving someone who’s been bitten is to lop off the stricken limb as soon as possible. Medical science has evolved somewhat, but certainly not enough to take risks with them.

A new arrival was walking from his quarters when he found this on the path. The right thing to do is to call to someone who is practiced in dealing with such a creature. Apparently you shouldn’t chop off its head, because it can still bite you; you break its back with your machete and then let it die. I was taking this picture as it lay dying. Moments later its maw opened up fully & it exposed its fangs. Even near death, they’re dangerous. Your fearless reporter moved away pretty damned quickly.

By the way, as this is a protected area, you’re supposed to refrain from the Rambo tactics: unless it poses a direct risk, of course. In this case, the fer-de-lance definitely did. It wasn’t just passing through: they’re territorial, and it would have returned again and again.

The scorpion in attack mode. Click above for bigger picture

Also: Ethan & Zack act as tourists after having removed the scorpion’s stinger

Scorpions come in all shapes and sizes. I've seen a lot of them in BZ, and it’s one of the reasons why, if given a choice, I sleep in a tent: you can zip up a tent, and nothing gets in. In the “dorms” or the cabañas, you’re reliant upon other people to close doors, and I remember students telling me how they’d have to sweep their beds for scorpions before they went to bed. This is not for me.

Unless you’re allergic, or somehow infirm (or very young or very old), scorpions don’t kill. Their sting just hurts a lot. But they’re clearly designed for fear: they look like shrimp from hell. they move quickly, and they’re not easily killed, as their exoskeleton is very strong. I’ve stepped on them a number of times and it’s done nothing to them.

The fur bristles when it’s enraged. Taken by Lauri Thompson with her Kodak DX6490.
Click for bigger picture

Remember, if it’s pretty, it’s dangerous. This fluffy white caterpillar (about two inches long; I’m afraid I didn’t get its name), if its fur brushes you, will cause you excruciating pain for three days. The medication they give its victims is the same stuff they give cancer victims.

This caterpillar was found where the women go to relieve themselves when they are out in Dos Barbaras: not something you want brushing up against your skin. It was shot on a dust pan and, obviously removed from the area. There is another photo of it taken from above, so you can see just how the fur spreads out in interesting (and enticing) ways.

You may be also interested in seeing this spiny green caterpillar (view 1, view 2)— yet another that gives you a nasty rash when it brushes your skin (taken by Lauri Thompson with her Kodak DX6490). 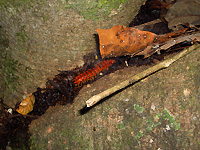 Creepy crawlies: millipedes & centipedes are everywhere. Taken by Jenny with the Pentax. Click for bigger picture

There are millipedes & centipedes all over the place. And yes, they come out of the woodwork (literally and figuratively speaking) when it rains. I cannot tell you just how many of these type of things I saw curling around & writhing after it had rained. After a while it just looked like they were having a good time bathing.

At first I thought this should be placed in the “non-dangerous” section — but from the comfort of 4,000 miles away, I’ve discovered that this wasn’t quite correct. Julie Saul wrote: “that pretty orange centipede thingy will sting the bejesus out of you if you touch it — they all do. Awful stinging raw rashes”. Hooray!