It’s not all dangerous out there: some of the creatures are just fantastic. We had bee-striped crickets, “gold” beetles, praying mantises and all sorts of other less hostile (hopefully) creepy-crawlies.

This section should expand exponentially as I get photos from others, and some of the blurrier photos will be replaced by their clearer ones (hint, hint!).

Just hanging out on a path at camp. Click above for bigger picture

It’s hard to give an idea of just how many insects & the like are running around. You can’t carry your camera around with you all of the time (although I will in the future, frankly).

This incredibly colourful cricket — about three inches long — was just hanging out on the gravel path near Julie & Frank Saul’s cabaña. As you can see from this photo, it would be very easy to step by (or on) such a creature when it lies on the path — it just blends in so well. But it’s definitely worth looking at more closely. I love the richness of colour that this thing displays. 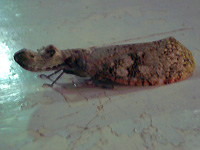 It looks hippo-shaped to me. Click above for bigger picture. Taken by Jenny with the Pentax.

Also: see its colourful underside. Jenny took this on the opposite side of a screen door in the mess hall.

They may be officially called “peanut-head moths”, but they look like hippo heads to me. These photos were taken at about 6am, in the mess hall (hence the shaky camera work — it’s not very bright at that time of day).

This is about five inches in length. When it flies, its wingspan is about six inches. I discovered this my very first night at camp in 2003. I was sitting in the latrines, a little freaked out about being in the jungle, when this thing landed on my exposed crotch. My panicky response was modulated by the fact that people were nearby, and I didn’t want to sound like a total loser. So I just cried out “…Oh!”.

Julie Saul writes “we stopped by the Museum in Belize City on the way out and in the “insect room” found the moth. It is harmless, but the card in the display states that there is a local legend that if a young woman is stung by this moth she has to sleep with her boyfriend within 24 hours or she will die. Hah! wonder who thought that up?!?” Indeed. Smart boys…

We’ve also had a submission to state that the “Peanut-Headed Moth” isn’t a moth at all, but a “Peanut-Head fulgorid”, a member of the plant hopper family. You learn something new every day. 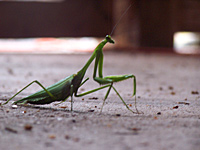 Hard to identify when they’re flying: a praying mantis decides to walk about on the floor. Taken by Lauri Thompson with her Kodak DX6490. Click for bigger picture.

On one of our last nights at the PfB camp, a number of us were in the mess hall & saw this huge thing flying around one of the lights. It was easily six inches long, and its size made it sound, while flying, something like a B-52 Bomber.

Rose, one of the students explained to me that this was a praying mantis. I was convinced that it wasn’t, because I never thought they had wings. Rose was very patient with me as it dawned upon me that perhaps I was wrong; and I am grateful to her for that.

This is the one and only praying mantis I’ve ever seen—in Belize, or anywhere, for that matter. It’s an astounding thing to see them up close like this. As this photo attests, their abdomens really look like leaves.

Less an insect, more an industrial tool: a grasshopper watches and waits. Taken by Jenny with the Pentax. Click above for bigger picture

These are quite common down at camp — I saw quite a few. This appeared at the mess hall one morning just before breakfast at 6am. I wish we had a direct side-on view, because it’s truly wonderful: it looks less like wildlife, and more like an industrial tool.

At one point in my life, something this big — so large you can see individual moving parts easily, without the aid of a microscope — would have totally unnerved me. But again, when you realise that they’re more afraid of you than you are of them, those irrational fears really melt away. 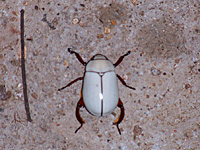 I honestly don’t know whether this should be in the “dangerous” or “non-dangerous” section. I hope “non-dangerous” because you see a lot of beetles all over the place, and you certainly don’t want to think that they’re about to bite you & thereby turn your guts to goo while you’re sleeping.

I didn’t see this beetle—there appears to be hundreds of different varieties scuttling along wherever you look. But I did see one that was shaped almost exactly like this—shiny & gold, it reminded me of Poe’s short story The Gold Bug.

Stand still, dammit! A bird allows its picture taken. Taken in 2003 with a Kodak DC290. Click for bigger picture

Also: a curaçao that we saw (sort of — it wanted to stay hidden) on the way to Chan Chich. Taken by Jenny with the Pentax

In 2004, I saw far more birds than I did the previous year. I took this picture for a number of reasons: first of all, to prove that there actually were birds around, because I didn’t see many at all.

More importantly, I took it to commemorate one aspect of living down at the camp: the nearly deafening sound of birds in their dawn chorus. In 2004, this chorus wasn’t quite as cacaphonous, but in 2003 there were so many birds, and so many incredibly complex calls, that I wish I had a tape recorder just to record it. But given the hostile environment, they naturally don’t want to spend much time being seen, or being within reach of a predator.

Yes, there are deer around. Taken by Jenny with the Pentax. Click for bigger picture

Boring! Not really. These deer were really quite pretty, and you can see dozens upon dozens of them in the slightly more cleared land nearby (some of it is cleared, you know, once you leave the environs of the rain forest).

This was taken on the way to Chan Chich (much needed R&R) while we were bouncing along in the back of a pickup. These deer are quite clearly a lot tamer than the ones we see in the US or UK: a big clanging truck did nothing much to disturb them or drive away their curiosity.