This doesn’t run away: be very careful with it.

Drip drip drip: chichem oozes from a nearby tree. Taken by Jenny in 2003 with a Canon Elph. Click for bigger picture.

Ah, sap! It’s all New England and maple sugar candy, right? Not quite. Down in Belize, some trees ooze chichem, an entirely different type of sap. If it hits your bare skin, it causes a third-degree burn & massive welts (about 1/2" tall, I recall). Moreover, it has a tendency to spread, because it’s a sticky oil, so you have to be careful.

So how do you get hit by chichem? Basically by being inexperienced. A lot of students, when clearing brush, tend to be a bit wild when they swing their machetes, and hit nearby trees willy-nilly. (The Maya workers use much more short, controlled movements when using the machete). When the students hit the trees, the chichem flies, and hits… their bare skin, because the students are wearing short-sleeve shirts. Ouch.

There is a traditional cure. Take the red & peeling bark of the tree often growing nearby the chichem (the locals call it the “tourist tree”), boil it for some time & apply as a salve to the affected area. Magic! 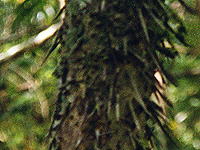 I find this truly evil: escoba. Taken by Jenny in 2003 with a Canon Elph. Click for bigger picture

Sing, Muse, of the bane of my existence down in Belize! Picture it: you’re walking through the jungle (we’ll use the less politically correct term for this, as it’s more evocative of nature’s fundamental hostility), and you’re tripping over every !@!$#&£$! vine that’s crawling along the ground. As you stumble, you reach out to a young sapling to keep yourself upright and… you’re rewarded with a handful (literally) of needles. Meet escoba.

I was never stuck with escoba, though not for lack of trying. I remember at one point thinking that it was better to take a tumble down a hill, and suffer whatever resulting consequences, than to grab onto this damned thing.

Keep your hands to yourself: thorns waiting for tasty flesh. Taken by Jenny in 2003 with a Canon Elph. Click for bigger picture

Julie Saul says that this is in all likelihood Bullhorn Acacia. A good name for it — the thorns do look like bull’s horns. In this example you see the more or less mature sapling with the large thorns sticking out. This you can see easily: it’s when they’re young, and all you have are these wispy, hair-like tendrils swirling about your head, with sharp little thorns that you don’t see until they’re two inches away, that you realise just how evil these things are.

But let’s up the nightmare quotient, shall we? When it’s mature, those thorns are hollow, and filled with… ants. So, when it sticks you, suddenly you’re covered with ants wondering what happened to their happy home.

This stuff is naturally cleared from paths that the student make through the jungle because it’s just so irritating. As far as I know, it’s not dangerous per se — after all, Jenny got stuck by some of this in 2004 (the young tendril kind, not the ant nightmare kind), and she appears to be all right. But I think it certainly merits its place on this page. 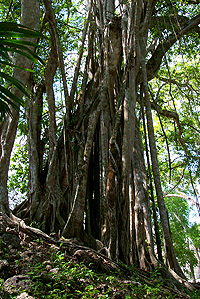 Slowly taken over: a strangler fig takes another victim. Taken in 2003 with a Kodak DC290. Click for bigger picture

The danger here is not to people, but to trees. Strangler figs start to climb their host, and then then grow & grow around them. Eventually, they surround the tree — and strangle the life out of it. Eventually the tree rots away, and all you have is a massive strangler fig with a hollow core. All the while it’s dropping tendrils to the ground looking for another victim.

To tell the truth, I don’t know how prevalent these stranglers are: they seem to grow in patches, and other areas seem mercifully (for the trees at least) free of them. I didn’t see that many in the Dos Barbaras area, although when we went to Lamanai (where this photo was taken), there were quite a few. Also, I seem to recall seeing some at La Milpa. Perhaps they just weren’t big enough at Dos Barbaras.

Destructive as they are, I can’t help but be struck by their beauty.